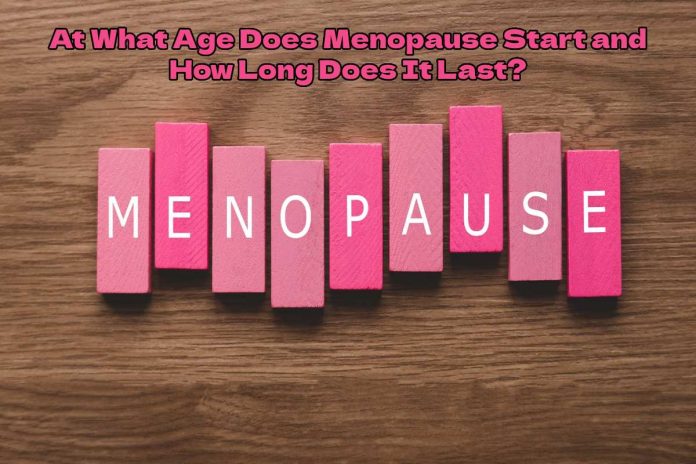 Menopause is an inevitable part of life for women. It is a normal life transition from reproductive years to the end of the menstrual cycle. The age at which menopause starts varies greatly from one female to another, and various factors affect its start. The average age that it starts is usually somewhere between the ages of 35 and 55.

It also occurs in stages, and each one has certain symptoms. Fortunately, menopause does not last forever, although it often lasts anywhere from four to 10 years, and during this time, there are things you can do to minimize symptoms.

Perimenopause is the first stage of menopause, and it refers to early menopause. It begins when the levels of reproductive hormones begin to decline, and many women start this phase when they are in their 40s. This stage may last anywhere between a few months to 10 years.

Because of the hormone fluctuation, the symptoms in this stage are often the most intense. Irregular periods and hot flashes are some of the most common symptoms. If you are asking, what does a hot flash feel like, you are not alone, as around 75% of women in this stage experience them. Most women describe it as a sudden feeling of warmth in the upper body and face with accompanying red skin and sweating. Additional symptoms of this stage include:

Because perimenopause has many symptoms that are similar to pregnancy, some may be asking how often does menopause cause positive pregnancy test? The truth is that it is possible to get pregnant during perimenopause because, even though periods are often irregular, the body is still producing eggs.

However, once you reach menopause, you are no longer able to get pregnant. Menopause is the second stage, and it begins when you have gone 12 consecutive months with no period. The average age that a woman reaches this stage is 51, but this varies.

Many of the symptoms experienced during perimenopause may also occur during menopause for a little while. However, they are often less intense. When a woman experiences the unwanted menopause symptoms, she is actually probably in the perimenopause stage.

Once a woman has reached the menopause stage, she is officially in postmenopause. Although the aforementioned symptoms are usually gone, a woman going through this stage has other concerns to focus on. Because of the decreased levels of hormones, women are more susceptible to certain health conditions such as urinary tract infections, osteoporosis, diabetes, heart disease, autoimmune disorders, and incontinence.

Although a woman going through the stages of menopause will often experience one or more symptoms, not every woman does, and the intensity can vary. To manage symptoms, there are a number of things one can do. Many doctors prescribe hormone replacement therapy, but they have serious side effects. As an alternative, you may be wondering what is s equol. This is safe and effective, and it helps to balance estrogen and progesterone levels, which keeps symptoms to a minimum.

A Guide to Eyelid Surgery

Watch Harry Potter And The Prisoner Of Azkaban Putlocker

Watch Harry Potter and the Chamber of Secrets Putlocker

Dental Implants Recovery: What to Expect and How to Prepare

tmbeauty - September 13, 2022 0
Dental implants are a permanent tooth replacement solution. If you are considering this option to replace missing or problematic teeth, you may want to...

Do you want to Fix your Makeup? These are the Best Translucent Powders

tmbeauty - May 16, 2021 0
Fix your Makeup, suppose you have never tried them, either because you think they are not for you. Because you do not know what...

tmbeauty - May 5, 2021 0
Many women feel the need to find some solution to avoid frizzy hair. Although it is not a serious problem, it is very annoying for those...

What is Beauty – Observation, Natural and Artificial Beauty

tmbeauty - May 4, 2021 0
is the attribute that we recognize in beauty. As such, some of the qualities traditionally accorded to the beautiful are harmony, proportion, symmetry,...

Why Are Hermès Timepieces A Favorite of Watch Enthusiasts?